You are here: Home1 / visionary

There are literally thousands of LinkedIn profiles where people describe themselves as visionaries. Why does that matter? Let’s save that for the end of the article….

The Gift of Prophecy

As a young boy, I devoured Greek mythology. Before I could read, my mother would tell me bedtime stories about Zeus, Hercules and many of the other gods and mortals. When I got older, I would read Edith Hamilton and play the stories out in my imagination. I was probably less than ten years old when I learned about Cassandra. A prophetess, she was gifted with the ability to see the future, but cursed by her inability to convince anyone that what she prophesied would come to pass.

When I grew older, I began to reference the story of Cassandra as a means to explain my missed opportunities in business. I felt, that like her, I could see possibilities just a few years out, but couldn’t capitalize on them because I couldn’t convince people that my forecasts were accurate. In 1994, I had this idea that job searching would become a popular online activity. I saw a two-sided marketplace — employers and potential employees — and the power of the web to make this happen. I found myself a partner with some money, a development team (this was before I learned to code) and we were off to the races. The problem was that my partner and I disagreed about everything you could imagine so I soon agreed to let him buy me out so I could focus on just being a college student.

Struggling to Sell the Dream

Fast forward a few years to the early 2000s and I was now convinced of another sweeping change that involves the Internet. Video, I firmly believed, was due for an online explosion. Not just that, but it would be led by regular people creating “user-generated content.” I found a couple of people who agreed with me and we built a website where a community of users could come together and share video that they created. To scale this thing — to really build it into a big business — was going to cost money, so we decided to start pitching.

“Is this really necessary?”

“Who wants to watch other people’s vacation videos?”

“Interesting, but how big is this market, really? I don’t see how you can get to a billion-dollar exit.”

“Too early for us. Have you talked to the New York Angels?”

I had talked to the NY Angels. I paid several hundred dollars to have them review our two-page application and was rejected by email. After struggling to get them to return a call, I connected with a friend of a friend who knew someone there. I got on the phone with the person who had rejected our application.

“Will you be cash-flow positive in two years?” he asked.

“Then it’s not the sort of business that we looking to invest in.”

And that was basically the end of that conversation. Less than a year later, I received a call from Mike Maples, who had been very gracious with his time and expertise. We had been introduced because he had invested in a startup called “Odeo,” which was focused on organizing podcasts. Mike told me to go to my computer and look up a site.

“Utube? Doesn’t look anything like what we do,” I told him.

“What a terrible name…. Who is going to get the spelling right? Okay, it’s loading now. Yep, it’s similar, but we have way more features than they do.”

A “Lazy Sunday” later, we pivoted. There was no way we were going to keep up with YouTube; they were out-executing us. We closed down Vlogville, our community video site, and focused all of our energy on providing backend video infrastructure and services to businesses as Twistage. We had a nice exit, not on the order of magnitude of YouTube, but it was an excellent outcome for all involved. However, the best exit of the companies listed in this article did not belong to YouTube, however. It belonged to Odeo. Or as it is now more commonly known — Twitter.

Huh? Ev Williams, the visionary behind blogger (acquired by Google), was also behind Odeo. And he was right about podcasts. There would be loads of them: 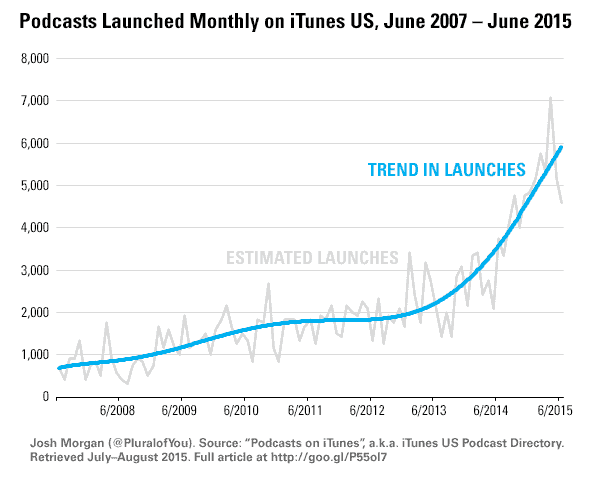 However, the timing wasn’t quite right. Add Apple’s launch of iTunes and Odeo was on shaky ground. So Williams and his team decided to offer a refund to their investors as they changed the business from podcasting to microblogging. Some investors, which included the aforementioned Mike Maples, decided to let their investment ride. Did the decision to shift the company’s resources and mission to Twitter require a vision of the future? Absolutely. But it was incredible execution that led to hundreds of millions of users.

Lots of people have lots of wonderful ideas. That’s why the line “Ideas are cheap” has become so commonplace in business writing. I had more than an inkling that job hunting and video would be moving online, but I lacked the ability to sell the vision at the time.

So let’s go back to the question I posed in the beginning of this piece: Why does it matter? It matters because you undermine the perception of both your idea and your ability to execute when you call yourself a visionary. But you’re lucky. There’s an easy fix for this. Simply stop calling yourself a visionary. It sounds arrogant and doesn’t really tell anyone anything about you other than that you’re not lacking for self-confidence. While the word literally means “having or showing clear ideas about what should happen or be done in the future,” the connotation has a bit more “magical heft.” I’d say that it’s best to use the word “visionary” the way people should use the word “genius,” i.e., if someone else calls you a visionary, feel free to use that in material that describes you. On the other hand, if you’re the only one is who sold on your soothsaying powers, I’d recommend that you find a different adjective.