In my last business, we had to go through three hosting providers before we found one that was a good fit. At the outset, our needs were modest but specific and we finally chanced upon a provider that made sense for us. We didn’t have a formalized purchasing process (or the free cycles to put together an RFP) and it was a struggle for us to reconcile the incredible importance of hosting for our SaaS offering with the financial and temporal constraints faced by most small businesses. While we ultimately found ourselves with a hosting company whose offerings and culture aligned well with our needs, we never wanted to be complacent with regard to our selection. Was there something out there that performed better, cost less, or was still better suited to our requirements?

As our business evolved, so did our requirements. In particular, we would have spikes in computational workload that were unpredictable. Amazon, which to that point, was simply regarded as an online retail giant, launched a beta of a service called EC2, which offered some of their spare compute cycles in an on-demand way. We were quite happy with our hosting provider at this point. So while it didn’t make sense for us to swap out what we had, it made all the sense of the world for us to leverage EC2 and adopt a multi-provider strategy. Suffice to say that things went well enough for us that we happily participated in a case study: https://aws.amazon.com/solutions/case-studies/twistage/.

Roughly a decade after Amazon’s initial foray into IaaS (Infrastructure as a Service), the market for such services has experienced “hockey stick” growth. What was under a $3B global market as recently as 2010 now projects to come close to $25B in 2016.

Thus far, Amazon has held on to its first-mover advantage and remains the largest player in the IaaS space. But for all the press that they’ve received, the lion’s share of the market belongs to non-Amazon companies. It wasn’t too long ago that Microsoft promoted their cloud chief, Satya Nadella, into the CEO position. More recently, Urs Hölzle, Senior Vice President for Technical Infrastructure at Google, shared, “My goal is for us to talk about Google as a cloud company in 2020 because our revenue is bigger than the ads revenue and it’s a realistic possibility.” Considering Google generated $67.39 billion in ad revenue in 2015, that’s an extremely lofty ambition.

The growth curve of cloud services as a category is so steep that it makes sense for companies to shoot for the stars. The other side effect of a large and fast-growing market is that new entrants enter the fray at a rapid pace. Add the combined IaaS market share (see the chart below) for the aforementioned companies — Amazon, Google, and Microsoft — and you’re still looking at coverage of less than 50% of the market. In fact, the most successful company offering an IaaS platform is “Other.” With apologies to Other Inc., the “Other” in the chart is not a company at all, but rather represents the combined market share of companies that weren’t fortunate enough to be named on that list. 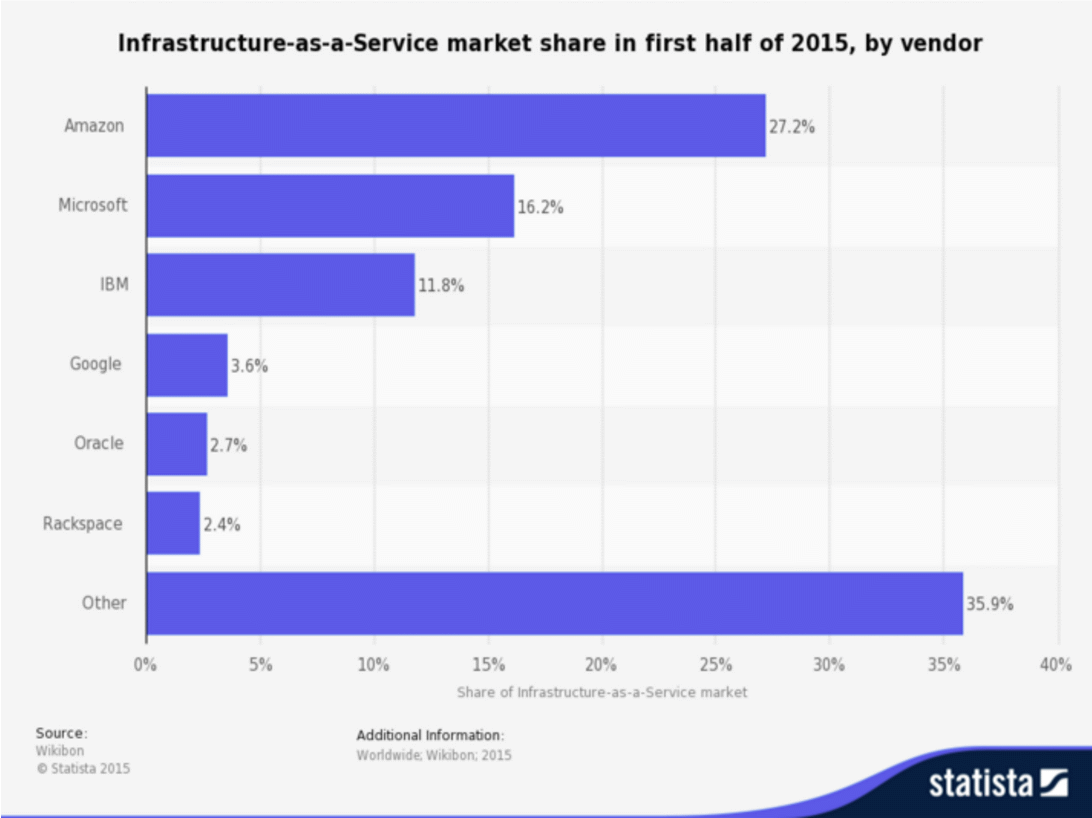 What’s right for your business? It may well be one of the market leaders. However, it might happen that the best fit for you is a company that you haven’t yet discovered. But how do you find them, much less evaluate them? That’s where we come in. We’ll let you explore the offerings of market leaders as well as discover hidden gems. And then we’ll provide the tools to evaluate these vendors side by side so you can make an informed decision about what’s best for your organization’s needs. We’re unbiased and driven by a single goal — to help you make the best buying decision you can.

(For those of you who are still confused by the title, please allow me to explain. Market leaders are sometimes called “800-pound gorillas.” With Amazon’s IaaS market share listed at 27.2% in the chart above, I simply took 27.2% of 800 pounds and voilà — a much smaller gorilla!)

BoringBack — Why a Boring Business Has Sex Appeal
Scroll to top